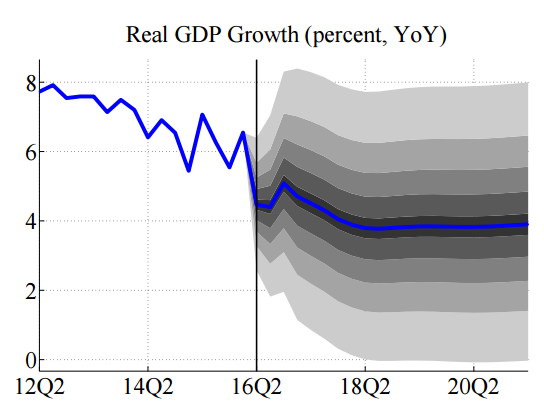 In our most recent macroeconomic forecast (for comparison, see our previous macroeconomic forecast blog post on Tajikistan), we estimate that the remittance inflows declined by more than 20% over a year ago in 2015. Remittances have been negatively affected by last year’s depreciation of the ruble, the slowdown of the Russian economy, and by administrative measures imposed by the Russian authorities to protect their own labor market. Based on our estimates, the drop in disposable income depressed domestic demand, pointing to a significant slowdown of the economy. Growth will start recovering somewhat in the second half of this year, thanks to several large-scale Chinese-financed investment projects. However, the medium-term outlook for Tajikistan remains subdued on the back of only a gradual revival in Russia's economy.

The falling remittances have led to serious pressures on the country’s external balance, leading to about 50% depreciation in the domestic currency, the somoni, since late 2014 (it has remained stable at 7.86 TJS per USD since February 2016). The National Bank of Tajikistan (NBT) introduced administrative controls on the foreign exchange market in December 2015 in an effort to smooth the depreciation. We predict a further weakening in the exchange rate due to a long-term high inflation differential and precariously low level of international reserves.

Despite the past exchange rate depreciation, inflation will be constrained by favorable cost shocks (good regional harvests) and subdued domestic demand in the short run. Going forward, we expect inflation to gradually accelerate to about 8% YoY in 2017 as temporary shocks fade away and world food prices recover.

The risks to our latest forecast remain high on negative side. Two largest banks, Agroinvestbank (AIB) and Tajiksodirotbank (TSB), face liquidity or capital problems. A banking crisis could cause severe difficulties in a country with high external debt repayment needs and continuous currency pressures. A lack of agreement with the IMF could lead to a much sharper exchange rate depreciation than envisaged in our baseline scenario.

The economist responsible for this story: Zoltan Reppa