Our Take On Russia: Get Ready For Prolonged Recession 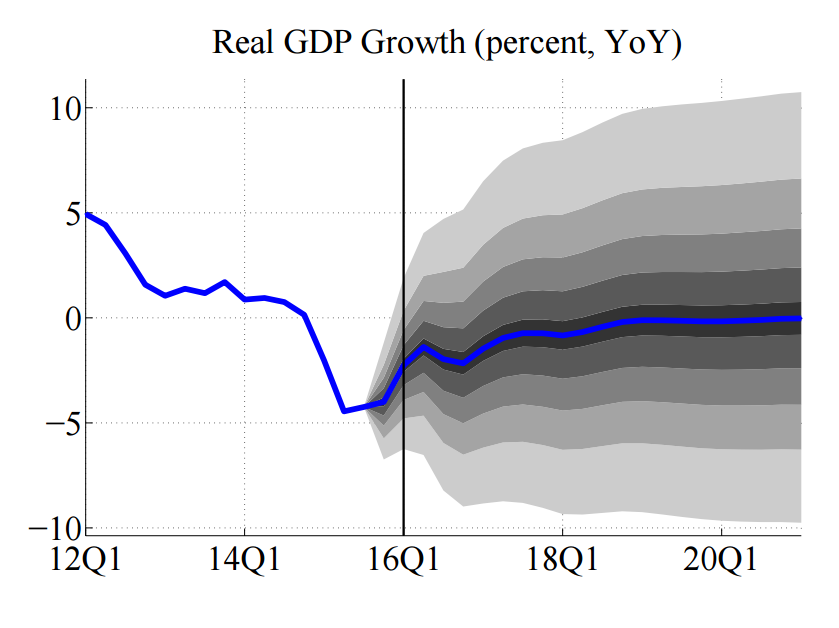 Our forecast for Russia's GDP growth.

One of the 26 countries covered by our Macro Forecast is Russia.

Commodity exporters such as Russia face huge challenges, when a structural change hits the market they rely on so heavily. This is exactly what happened in 2014, which arguably marked the beginning of a new era for oil exporters and is why the world's largest energy trader Vitol Group sees impending decade of low oil prices. This is bad news for Russia, which relies so heavily on oil and gas revenues.

As the price for a barrel of Urals is merely 30 dollars at present, down from 100 in mid-2014, Russia’s national funds are bleeding. We at OGR see Russia’s Reserve Fund declining to approximately 2 percent of GDP by the end of 2016, down from 5.6 percent of GDP in 2014. With financial support fading, the government will have to revert to classic fiscal tightening in order to balance the budget. The ruble’s sharp depreciation mitigated the fall in the ruble value of oil income and reduced pressure on public finances, but it may not be enough. Russia’s 2016 budgetary plans assumed the price of oil would average at 50 dollars, which now seems very unlikely. Unsurprisingly, the government announced fiscal tightening measures amounting to around 1 percent of GDP, but there may be more to come. The privatization of the many state owned companies could also help, although it is certainly not an ideal time to sell Russian assets.

We remain pessimistic about Russia’s prospects. Our Macro Forecast shows that the economy will not emerge from recession until at least 2018.