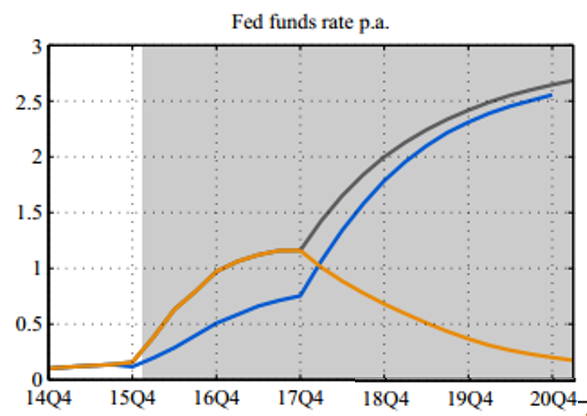 The Fed decided to start normalizing interest rates in December 2015. It was argued that the slack in the US economy has diminished to a point where inflation pressures should start to gradually build up in the coming years. However, the Fed has been faced with a communication challenge as the strong dollar and falling oil prices put temporary downward pressure on consumer prices and outweighed “rising inflationary pressures”. Still, the argument went that a delay in policy normalization for longer would have ended up in a need to tighten policy abruptly later to keep the economy from significant overshooting. As a result, after the December hike, up to four additional rate hikes were foreseen by the FOMC members for 2016 and by 2018 the Fed funds rate was expected to reach 2.9-3.5% (after the March meeting, the Committee members scaled back their projections to suggest only two further quarter-point hikes before end-2016). The secular stagnation hypothesis gives a competing narrative on how to read the current economic situation and consequently has very different implications for future economic policy.

The so called ‘new secular stagnation hypothesis’ was first evoked by Larry Summers in his now famous speech at the IMF in 2013, and subsequent elaborations, to explain the persistent under-performance of output growth in industrial economies. The hypothesis claims that there is a chronic excess of savings over investment in the advanced countries due to structural reasons, therefore the equilibrium real interest rate will remain chronically depressed, staying probably negative for a prolonged time.

Bossone (2015) gives an excellent overview of the line of argument. Summers conjectures that aggregate demand may have collapsed already long before the crisis (masked by unsustainable finances) that have led people to raise their savings while simultaneously reducing investment propensities. Under normal circumstances, Summers argues, interest rates would fall driven either by market forces or by policy actions until saving and investment are equated at the full employment level. However, this adjustment process comes to a stop if interest rates cannot fall enough to discourage saving and encourage investment, which is typically the case when nominal interest rates approach the zero lower bound. In fact, Summers warns that even if interest rates are not constrained from below, efforts to lower them give rise to financial stability problems. For this reason, he recommends policy strategies aimed at raising the natural interest rate by increasing public investment, reducing structural barriers to private investment, and taking measures to promote business confidence, maintain spending power and redistribute income towards people with a higher propensity to spend.

Low Rates Are Not Enough

If the secular stagnation hypothesis is true, delaying policy rate normalization would not result in unwanted overheating. On the contrary, rising Fed funds rates would encourage savings and discourage investment even further, prolonging the period of low economic growth. In this case, the interest rate cycle might need to be reversed and near-zero rates can be expected to stay for a longer time. Still, keeping interest rates low is not enough, the main message of the secular stagnation camp is that escaping secular stagnation requires the active use of aggressive fiscal policy.