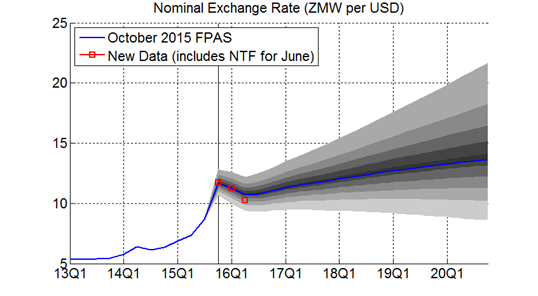 Illustration of outlook for Zambia's currency, the kwacha

The Zambian kwacha was the third worst performing currency of 2015. There was a litany of causes for the depreciation of the kwacha in 2015, including: falling copper prices (see chart below), lower demand from China, fiscal concerns, energy shortages, and loose monetary policy. In the fourth quarter of 2015, the Bank of Zambia stepped up its sales of U.S. dollars (roughly 2% of GDP from September to December 2015) which helped curb the depreciation and stabilize the kwacha. However, markets have remained far from convinced that the structural issues in Zambia are close to being resolved, including namely the country's dependence on copper (70% of total exports), the dismal energy situation that led to mine closures in 2015, and fiscal uncertainty surrounding government spending prior to the upcoming general elections in August. As a result, the kwacha has been steadily depreciating since April, by about 20% over the past two months.

Our last macroeconomic forecast for Zambia was in October 2015. At that point, even though the kwacha had yet to reach its weakest point, we expected policy to tighten and to lead to an appreciation in the near-term. In November the Bank of Zambia (BoZ) raised interest rates by 300 bps (from 12.5% to 15.5% p.a.), but has been on hold since then. As a result, the tightening by the BoZ thus far has been less than we expected in October, which only increases the risk of faster depreciation than we forecasted. In addition, the aforementioned structural issues lead us to believe that further currency depreciation, albeit at a more gradual pace, is still in store.

Growth Forecast to Improve Only Slowly in Zambia

Real GDP is estimated to have grown by 3.6% in 2015, its lowest rate since 1998. We expect growth to improve only slowly, remaining below 5% in the next several years. The combination of slower growth in China, the aforementioned energy bottlenecks, and worries about the fiscal position will continue to constrain investment. Additional monetary tightening necessary to stabilize the kwacha and reduce inflation will be another impediment to growth, and this is on top of the extremely tight liquidity position of the banks which has crippled lending. The lack of credit growth combined with the twin fiscal and current account deficits pose risks to growth. On the other hand, improvements in copper prices and energy supply will help.

Consumer price (CPI) inflation spiked in 2015Q4, reaching 20% YoY. Exchange rate pass-through was clearly the main factor but it was exacerbated by weather induced food supply shocks. Prices have stabilized in the last few months, most likely aided by the April appreciation of the kwacha. However, inflation pressures should continue to build as the kwacha resumes a gradually weakening trend and fiscal policy loosens in the run up to the elections. In addition, the need to liberalize electricity and fuel prices will contribute to inflation in the coming years.

Fiscal Consolidation To Get Going in Zambia

The budget deficit for 2016 is expected to be largely unchanged from last year’s 8.1% of GDP. Earlier the Finance Minister had announced some ambitious consolidation plans amounting to less than 4% of GDP, but it appears likely that such target will be missed. The need for energy imports and the higher cost of fuel subsidies contributed to a higher than planned deficit. After the elections (and a potential deal with the IMF), fiscal consolidation should get going, although interest payments on the debt (T-bill rates have hit 25%) will hamper the consolidation efforts.

The current account deficit was estimated to be about 7% of GDP in 2015. The deficit should narrow this year as imports have fallen in early 2016 and copper prices have rebounded. However, FDI inflows have been negatively affected by all of the aforementioned structural issues. FDI should recover with copper prices and fiscal tightening, but the current account will remain in deficit for the next several years. Although the announced investment by the mining giant Glencore is a positive sign, improvements in the energy grid are still badly needed to help attract further investment.

The economist responsible for this story: Peter Elliott