Our Updated Take On Azerbaijan: Economic Recession to Continue 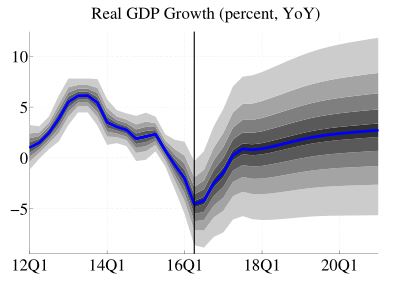 Low oil prices, restrained fiscal spending, and increased geopolitical and business uncertainty will keep domestic demand low, and GDP will fall by about 3 % this year, according to our updated macroeconomic forecast for Azerbaijan (see our previous take on Azerbaijan for comparison). Growth will stagnate in the long term due to weak fundamentals and a slow rebound in the price of oil.

We expect inflation to accelerate above 15% this year, as a weaker currency fuels a rise in import prices. Later, tighter monetary policy and muted domestic demand will ease inflationary pressures. However, the validity of official CPI data is a source of concern as there are signals actual consumer prices are much higher than reported by the authorities.

In our view, the recent nominal exchange rate adjustment was large enough to restore stability to the balance of payments temporarily. However, we also believe that the country's competitiveness will continue to worsen due to weak fundamentals, low external demand, high inflation, and a decreased appetite of foreign investors to invest in hydrocarbon production. As a result, we forecast a gradual depreciation in the manat over the medium-term.

Risks to forecast on negative side

The risks to the forecast are high and mostly on the negative side. The banking sector remains vulnerable, albeit less so than it was in 2015. A further deterioration in banking sector balance sheets might result in a widespread banking sector crisis.

The latest clashes in Nagorno-Karabakh have instilled a feeling of instability. Although there is always a chance of the conflict flaring up, the current situation has returned to the status quo of the past two decades.

The economy remains dependent on oil price developments, representing a major, albeit balanced, risk to our projection.

On a more positive note, structural reforms may be adopted much faster. This will help improve the country’s competitiveness and attract FDI inflows into the non-oil sector of the economy, which, in turn, will help improve country fundamentals and lead to a faster real exchange rate trend appreciation.

Want to learn more about our forecast for Azerbaijan and other products and services? Please contact us!

The economist responsible for this story: Jiri Lukac