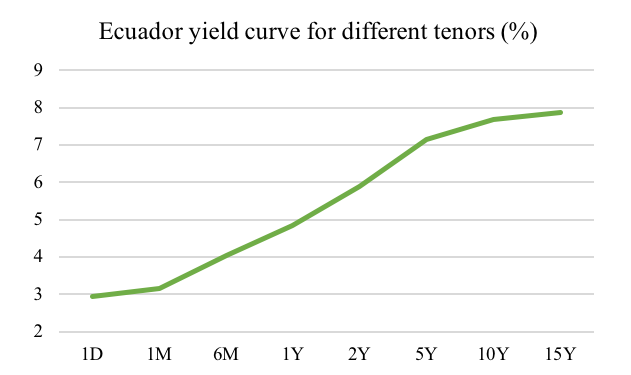 Oil-dependent Ecuadorian Economy Has Been Through A Recession

Oil has been an important Ecuadorian output item for decades and significantly affects the country’s economic performance. Ecuador is an OPEC member and ranks among the top 20 countries in terms of proven oil reserves. When international oil prices dropped in 2014, Ecuador was not spared from this external shock (oil accounted for over 50% of its total exports at the time). The terms of trade worsened by 20%, the trade balance switched from a surplus of 2% of GDP to a deficit of 7% of GDP, and real economic growth declined by 1.5% in 2016. In the same year, Ecuador was additionally hit by a strong earthquake, which put public finances and the balance of payments under greater pressure.

Despite An Economic Recovery, Macro Risk Assessment For Ecuador Moved to 'Negative'

Economic growth in Ecuador got back on track during 2017 (real GDP increased by 2.8% YoY in 2017H1), supported by an oil price recovery and improving domestic consumption. Higher oil prices and a weaker real exchange rate also improved the Ecuadorian terms of trade. As a result, exports increased by 16% YoY (and oil exports by 37% YoY) in 2017Q1–Q3, mainly due to higher demand for goods in Asia.

A relatively strong U.S. dollar pushed down prices on the domestic market, causing mild deflation of 0.2% YoY in November 2017. Ecuador has been a fully dollarized economy since 2000, so its central bank does not have control over domestic monetary policy. During the 1990s, Ecuador suffered its worst ever economic crisis. The domestic currency lost two-thirds of its value and inflation peaked at 100% YoY. Dollarization helped ease the external pressures and stabilize prices on the local market. Currently, monetary policy remains tight, with the BCE maintaining the short-term policy rate around 8%.

However, the strong U.S. dollar and loose fiscal policy increased demand for imports, causing a modest trade deficit during 2017H1, despite rising oil exports, and a subsequent decline in foreign exchange reserves, which dropped to only 0.7 months of imports during 2017. In addition, the Ecuadorian stock exchange index went up by 20%. As asset prices are currently above the long-term trend, a correction might occur. We have therefore had to revise our Macro Risk assumption about Ecuador’s potential economic imbalances, which will need to be addressed in the future through increased competitiveness. As Ecuador is a fully dollarized economy, the current macroeconomic imbalances cannot be adjusted by currency depreciation. We, therefore, expect a period of low growth and declining wages and prices, which will be joined by necessary fiscal consolidation in 2018 and beyond.

As Ecuador Recovers From Recession, Uncertainty Emerges Over Credit Position

Although the government realizes the need for fiscal consolidation, efforts made in previous years have failed to bring the public finance deficit below 5% of GDP.  At the end of November 2017, the government approved a budget for the new fiscal year with a fiscal deficit of 3.9% of GDP. It is expected that another year of a high fiscal deficit will increase the debt-to-GDP ratio above 40%.

Although fiscal consolidation is the president’s primary goal, the proposed 2018 budget tends to go against his efforts. On the revenue side, it aims to improve the business and investment environment through tax cuts, while the president’s ambitious social spending plans should remain untouched. The loose fiscal policy may thus cause debt financing problems in the future, causing high uncertainty about the country’s credit position.

OGResearch estimates its Country Risk Rating for Ecuador at BB-, non-investment grade, based on a wide array of risk factors, including macroeconomic resilience, the business climate, and the political climate. Despite the relatively favorable macroeconomic environment in Ecuador (especially low volatility of inflation and a low current account deficit), a weak business and investment climate remains the main obstacle to investment opportunities.

The new yield curve published by OGResearch for Ecuadorian local currency bonds has a steep slope, increasing towards 8% on the long tenor given the need for fiscal consolidation and the challenging economic environment. Short-term yields are affected by the expected tightening of Fed monetary policy.

Interested in our Macro Risk assessments for Latin American and dozens of other emerging and frontier markets?