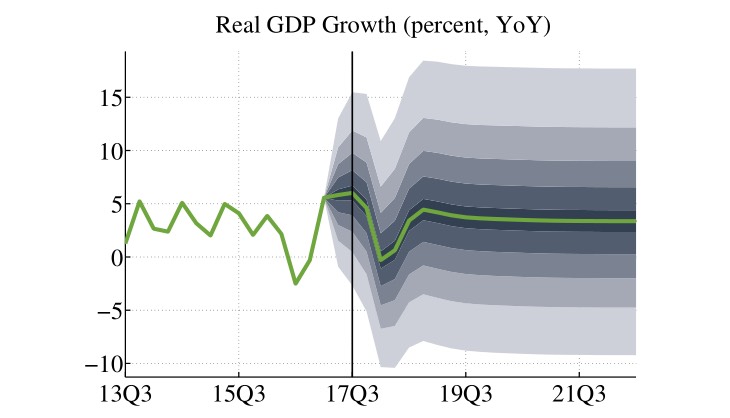 The Armenian economy has weathered the regional crisis remarkably well. Despite its strong ties to Russia, the country’s biggest trading partner and its primary source of remittances, its economy exhibited solid GDP growth above 3.0% in 2014–2015. After a temporary slump of around 2% YoY in 2016H2 caused by a bad harvest and – as we will argue - the tight policy of the Central Bank of Armenia (CBA), the economy rebounded sharply in 2017Q1 with a 5.6% seasonally adjusted YoY growth rate. Reaping the benefits of its Eurasian Economic Union membership, Armenia was able to increase its goods exports and narrow its current account deficit from 7.5% of GDP in 2014 to zero in mid-2016.

The CBA’s implementation of the inflation-targeting (IT) regime has contributed to the resilience of the Armenian economy. However, the Bank has not supported the economy to its full capacity. When the external shock hit the economy, the Armenian authorities chose to stabilize the exchange rate at the cost of economic growth and well-below-target inflation, in a move referred to in the economic literature as “fear of floating” (Calvo and Reinhart, 2002 - see reference below). The term is used when a country, although claiming to have a floating exchange rate, in reality prefers a smoother exchange rate and is reluctant to let the nominal rate fluctuate in response to macroeconomic shocks.

When the Russian crisis hit in July 2014, the Armenian real effective exchange rate (REER) appreciated by almost 17% in three quarters on the back of the collapse of the Russian ruble. To accommodate the shock, the Armenian authorities had to choose how much to let the dram depreciate or to allow deflation. While Armenia in theory operates a free-float full IT regime, the CBA allowed only a 15% depreciation in the AMD/USD exchange rate. This occurred in environment, when the USD strengthened against most major currencies, and hence the CBA let the dram exchange rate to appreciate significantly in real terms in an environment when the fall in remittances would have rather justified real depreciation.

Armenia was clearly an outlier in its policy choice when compared to regional peers (small, oil-importing countries in the CIS region: Georgia, Kyrgyzstan, and Tajikistan), whose currencies depreciated by about 30–60% during the crisis (see Figure 1). At the same time, the Armenian economy struggled with deflation throughout 2016 and with recession in 2016H2, while other countries in the region allowed for higher rates of inflation and more steady growth of the real economy.

In 2014H2, the CBA increased the policy rate from 6.75% to 10.5%, and then reduced it only gradually, mostly following declining inflation. In addition, in December 2014 monetary policy-makers dramatically increased the reserve requirement from 12% to 24%, which caused the interbank rate to increase close to 20%. The real interest rate thus remained above the OGResearch-estimated equilibrium value (the equilibrium interest rate is the real interest rate consistent with full employment of labor and capital resources, perhaps after some period of adjustment) from 2015Q2 to 2017Q1, contributing to the recession in 2016H2, deflation throughout 2016, and inflation expectations sliding well below target in 2016.

A full-fledged IT regime would have implied a less steep monetary tightening, more pronounced accommodation through the exchange rate, and thus inflation remaining around its targeted value of 4%.

The authorities’ fear of floating might be explained by the high rate of dollarization in the economy: over 60% of total loans and deposits, and likewise 85% of public debt, in the country are foreign-currency-denominated. Notwithstanding, Armenia is not an outlier in the extent of dollarization in the banking sector and public debt among its peers. Nor is it an outlier in the state of the banking sector: the ratio of non-performing loans (NPL) has remained in the 6-10% interval, corresponding to the regional average, albeit the capital-adequacy-ratio (CAR) remained somewhat lower until recently. Thus, although dollarization can partly explain the fear of floating, other countries with the same level of dollarization mostly allowed for greater exchange rate flexibility. Moreover, the fear of floating itself is a trigger for future dollarization problems and it might undermine effective policy-making in the future in the Armenian IT regime.

Economists responsible for this story: Barna Szabo and Mihaly Kovacs

Interested in our Macro Forecasts with exchange rate projections for Armenia and more than a dozen emerging and frontier markets?