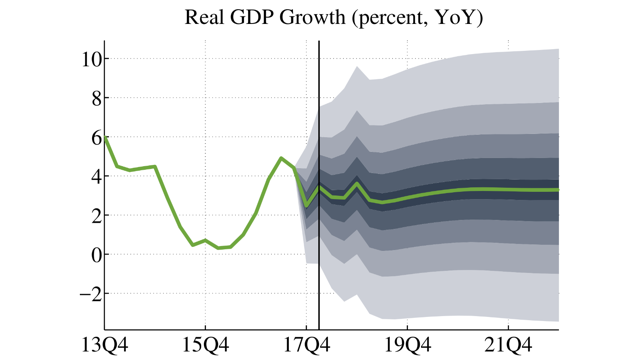 The recent spike in oil prices has boosted the economy…

After the sharp drop in oil prices in 2014–2015, Kazakhstan faced similar problems as other oil exporters. Although it avoided an outright recession, its real GDP growth slowed from around 6% YoY in 2013 to about 1% YoY in 2016. Last year brought a sharp recovery, with growth of almost 4%. However, the story remained the same as before: the rebound in GDP was driven primarily by an oil price recovery and to a much smaller extent by improved competitiveness of the non-oil sector after a sharp, more than 35% real depreciation of the tenge.

The country joined the OPEC agreement formally in December 2016, promising to keep overall production at 1.75 million barrels per day. Nevertheless, actual production increased at a rate of 11.4% YoY until November 2017, indicating that the Central Asian country was not complying with the deal.

… but the medium-term outlook remains meager

Although President Nazarbayev has made some efforts to reform the economy, the very strong correlation between oil prices and Kazakh economic growth has not been broken, indicating that the non-oil sector is still of secondary importance in terms of economic dynamism. As no further spike in oil prices from the current highs is expected, the plans for moderate growth in oil production (official announcements give a figure of 1% for 2018, so as not to obviously breach the OPEC deal) will not suffice to drive an enduring recovery.

Overall, Kazakhstan enjoyed a decent recovery last year. This can be explained by the spike in oil prices. This pace will be hard to sustain and growth could gradually slow to the 3% potential rate unless there is a further spike in oil prices or the country obviously quits the OPEC deal. Given the relatively tight monetary conditions, inflation could gradually slow to the central bank’s 5% target, while the exchange rate is expected to depreciate at a pace of around 2%–3% in the medium term, primarily reflecting a high inflation differential with respect to trading partners.

Banking sector weaknesses persist with no end in sight

Banking sector problems are further complicating the situation. The collapse of the exchange rate regime in 2015 and the accompanying economic slowdown revealed serious weaknesses. Although NPLs remained flat at around 8% of total loans until mid-2017, it has become obvious that the true portfolio situation may have been much worse. Rating agencies estimated the true level to be closer to 30%-40% at the end of 2016. As of January, close to 6% of GDP had been spent on bailouts, including that of Kazkommertsbank, one of the biggest lenders in Kazakhstan. Given the large gap between the official NPL figures and international estimates, this is hardly the end of the story.

In theory, there is no cause for concern, as the country has huge reserves in its National Oil Fund. These reserves, amounting to close to 40% of GDP, should be sufficient to comfortably cover any problems. Recently, however, over 40% of the assets were frozen after two Moldovan businessmen won an international arbitration award of USD 500 million against Kazakhstan. The Stati family alleges that the government forced them to sell their investments in the oil industry at an unrealistically low price. As a consequence, they have succeeded in getting USD 22 billion of the Oil Fund’s assets frozen in different countries to secure their claim. Although there is “only” USD 500 million at stake, the government faces a significant constraint on its accumulated wealth until the case is settled. Still, even the remainder seems enough to cover potential problems in the financial sector.

Interested in our Macro Forecast containing interest rate and exchange rate projections for a number of frontier and emerging markets?

Contact us to take a 14-day free trial of OGResearch’s proprietary online platform, the Macro Portal. You will receive regular updates on economic performance and assessments of macroeconomic and country risks in dozens of frontier and emerging markets.

We provide macroeconomic modeling, forecasting, and consulting expertise to a range of decision-makers.