Is the Russian Banking Sector in Crisis? 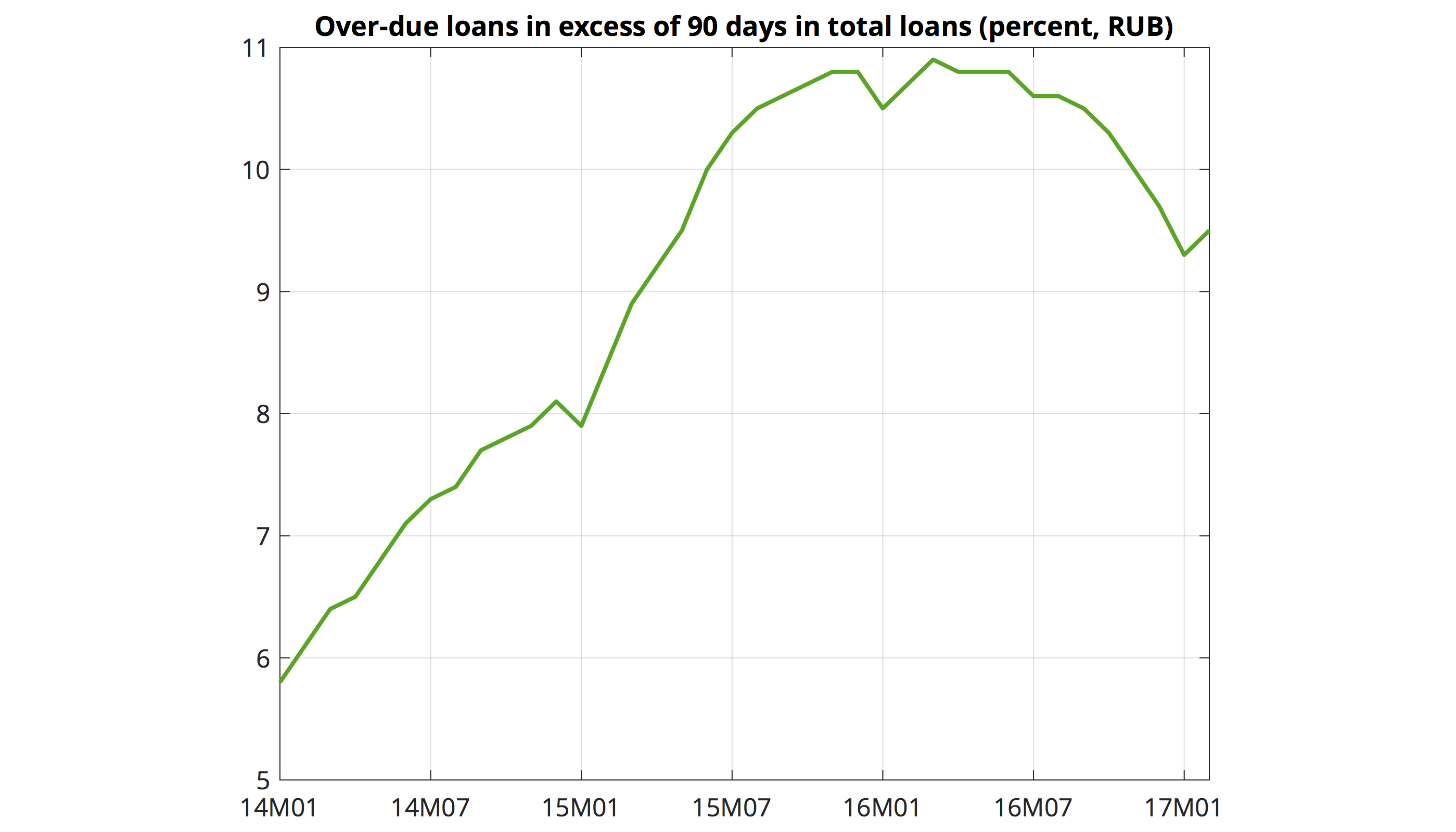 The Central Bank of Russia (CBR) has bailed out two banks in under a month. Otkritie, one of ten „systematically important” banks, had been downgraded by ACRA (Analytical Credit Rating Agency, a rating agency set up by the Russian government in 2016) to BBB- in July. The rating obliged state-owned firms to withdraw all deposits (~Rbs100bn), which induced a bank run in August. On August 29, the CBR stepped in, taking a 75% stake in the bank. A few weeks later, B&N, the 12th largest lender, appealed to the regulator after some of the banks it acquired since 2014 turned out to be in a worse shape than it had expected. In addition, the CBR withdrew the license of Yugra, the country’s 33rd largest bank, at the end of July. Although savers were reimbursed by the CBR, market concerns on banking sector’s stability have increased both home and abroad. The fears are not without a reason: non-official sources indicate the share of problematic loans in the sector might be in the range of 12-18%, the highest level since 2010. In that light, official data suggesting that NPLs reached a plateau at 11% in the first quarter of 2016 seem to underestimate the real size of trouble.

At the same time, the aggregate performance of the Russian banking sector has been improving over the past year, as emphasized by IMF’s July 2017 Article IV report. The banking system is now in a structural liquidity surplus, as deposit funding has returned to healthy growth rates. Lending activity started increasing in the fourth quarter of 2016 after years of contraction. Banks’ profitability is improving, supported by higher net interest margins and lower loan loss provisioning. Macro-prudential stability has been enhanced as well, with the Capital Adequacy Ratio increasing moderately to around 13 percent, against a regulatory minimum of 8 percent.

Aggregate indicators mask the large heterogeneity among individual banks. Broadly speaking, Russian banks can be classified into three categories. One cohort of Russian banks is formed by large, state-owned and relatively stable institutions. Asset concentration is high and expected to increase further with recent bailouts: all Top 5 banks are state controlled, comprising more than 50% of all assets. Another cohort of the sector is made up of medium-size, foreign-owned banks that perform well on the market, yet without considerable share in overall assets. The third group of banks is composed of sometimes bigger (such as Otkritie and B&N) but mostly medium to small, private banks. Many of these are called ‘pocket banks’, owned by industrial conglomerates with less transparent business practices. Overall indicators thus conceal that the distribution of problem loans is uneven: large, state-owned banks and foreign-owned banks are in a better situation than the small, non-foreign owned private banks.

The recent bailouts were a direct result of tightening regulations, as part of the CBR’s efforts to clean up the banking sector. However, beneath the surface, problems started earlier. In the past, small private banks were incentivized by the CBR through cheap loans to take over troubled banks to counteract the negative effect of western sanctions on large, state-owned banks. In this process, with the parallel tightening of CBR’s macro and micro-prudential oversight, more than 300 bank licenses have been revoked since 2013, reducing the number of credit institutions to around 600. The consolidation often led to over-expansion and worse-than-expected portfolio quality: Many private banks face a capital shortage if compared to the riskiness of their portfolio. Consequently, the CBR has changed its approach to consolidation recently. In case of Otkritie and B&N, the CBR took over the problematic banks itself, stating that in the future they will be privatized.

Concurrently with tighter regulations, the central bank intends to introduce a two-layer banking system to avoid too many small banks to be forced out of business. Banks will receive either “universal” or “basic” licenses. The basic license will allow the bank to accept deposits from domestic individuals and businesses, open bank accounts, make money transfers, exchange currencies, issue bank guarantees and loans to businesses if the maximum risk does not exceed twenty percent of the bank's capital. For a bank holding a universal license, a broader range of operations is allowed. Such banks will be able to accept deposits from foreign companies and citizens, issue bank guarantees to them, etc. The transition period will last until the end of 2018. Banks with basic licenses are expected to represent less than 2% of sector assets, thus limiting systemic risks stemming from lighter regulations. The basic license also restricts international operations, which will help preventing capital flight from the country. Despite allowances for “basic banks”, the consolidation process could involve further bailouts as increased competition could lead to a flight to quality favoring strong, state-owned banks. Additionally, problems of ‘pocket-banks’ are probably not over either until their portfolios are cleaned properly.

For now, a full-blown financial crisis appears unlikely, even if other banks fall short of capital. The Russian authorities have ample reserves to cover the total problem-loan portfolio, estimated around 3-5% of GDP (only around 50% are provisioned currently). Although the Reserve Fund has been decreased to support the budget amidst the crisis, it stabilized recently and the overall reserves of the government remain over 5% of GDP.

Notwithstanding, increased concentration of large, state-owned banks in the sector poses contingent liability risks for the sovereign over the longer term.  Given the level of development of Russian institutions, the high proportion of state-owned entities entails a risk of political influence and corruption, thus reducing long-term growth potential by harming the effectiveness of resource allocation. In addition, by becoming owner of around 5% of total assets, the CBR does not contribute to the transparency of the sector, either: according to international best practice, the central bank provides liquidity, while the state provides capital to troubled banks.

Economists responsible for this story: Barna Szabo and Mihaly Kovacs